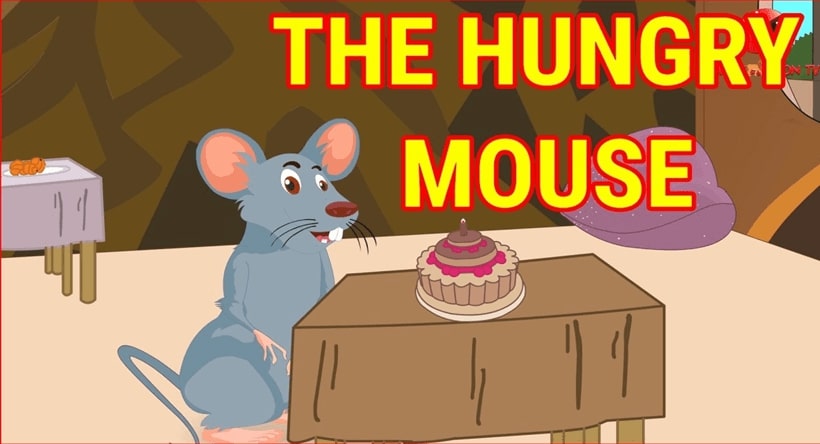 The hungry mouse sat in his hole thinking about how to fill his grumbling stomach. He decided to set out on a hunt for food. As he roamed around he came across a basket of corn. This made the mouse very excited, and began to find a way to get into the basket. This is when he found a small hole on the side of the side.

Slowly the mouse crept in and began to feast on the corn. He ate and ate till his belly was full. The mouse was very happy and decided to leave the basket to go back home. When he tried to slip out of the small hole he had entered through, he could not make it out. He pushed and pushed himself, but he would get stuck inside the little hole and could not make it out. The mouse began to panic and started crying and calling for help.

Soon a rabbit was passing by who asked the mouse why he was crying. The mouse explained how he had gotten stuck. The rabbit began to laugh. “You are stuck because you have eaten too much, and now you will have to wait till your belly shrinks back to normal again” explained the rabbit. This gave the mouse some relief.

So the mouse decided to take a nap and hopefully by the time he would wake up his belly would have shrunk back to normal. So the mouse lay on top of the corn and started to snore. Some time passed by and the mouse woke up and realized that his belly had finally shrunk. He was happy and relieved, and decided that he should leave.

But the mouse became greedy. He decided that he would eat some more corn before he leaves. So he began to eat and eat till his belly was big again and he was full. When the mouse tried to leave again, his belly got stuck in the hole and he began to panic once again. Now he would have to wait longer till he could finally go home.

However this time a big fat cat was passing by the basket. When the cat saw that there was a mouse inside, she quickly peered in and caught the mouse, gobbling him up and leaving with a full stomach. read more 5 minute stories.

The poor mouse’s greed had cost him his life.

Moral: Being Greedy Can Have Bad Outcomes.

Related Tales To The Hungry Mouse Story For Kid:

Aladdin and the Magic Lamp