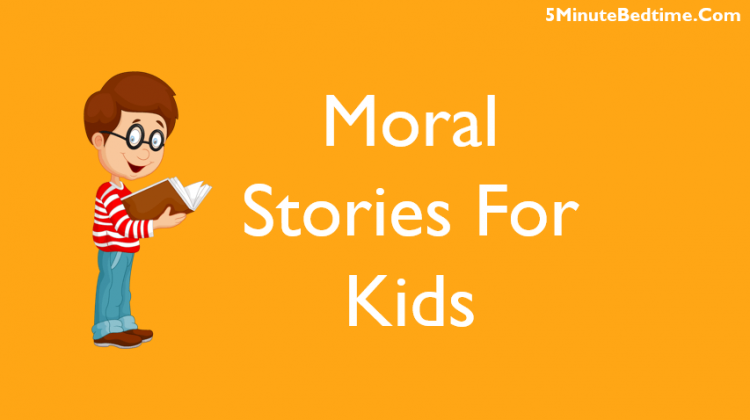 The Goose, Golden Egg and Farmer

The farmer and wife might not have had everything they ever wanted, but what they did have was something very special. On their farm was a goose, which lay a golden egg every day. The farmer would sell it in the market and get ample money in return. This kept the farmer and his wife happy initially, but soon they desired more.

They planned to get as many eggs from the goose and sell them all together, so they can get rich quickly.

The next morning they cut open the goose to take out all her eggs, but to their horror, there was only flesh and bones inside. They had foolishly killed their beloved goose for more money but now they would get none! The tale of the farmer thus birthed the idiom “kill not the goose that lays the golden egg” and became an important moral story for kids.

Four cows had been friends since forever. They did everything together, from grazing grass to resting and playing around. Because they always had each other, no lion or tiger could prey on them.

But one day, the four cows got into a fight. They argued and argued, till they decided that they would part ways.  That day each cow did everything on its own. They grazed alone, and rested alone and hopped around alone. Soon the lions and the tigers began to notice and hid in the bushes. As each cow passed by, they pounced on the cows and killed them all one by one.

Oh what an important moral for kids, it was their unity which was their strength, but the cows never realized it and had fallen to their fate.

Next up is an important moral story for kids, which takes through a fable with a fox.

The Fox and The Grapes

One day a hungry fox roamed the jungle in search of some food. He searched around himself, high and low, but couldn’t find anything appealing. Continuing his search he approached a farmer’s wall. His stomach grumbled at the sight of the big, juicy grapes at the top of the wall. Lush and purple in color, the fox could not wait to eat them.

Finally, he decided to give up and walk away.  “I’m sure they were sour anyways “huffed the fox as he made his retreat.

The fox unnecessarily despised what he could not have, just because it could not come easy.

The Four Friends Who Studied Hard

There was a group of four boys, who loved to party. If given the choice they would always pick partying over studying, because the hated studying so much. A night before their test, they were out having fun once again and ended up missing it next morning. They lied to the Dean that their car had a flat tire and because they didn’t have a spare they had to push it back in time. The Dean listened carefully and told them they could give the exam later.

Having gotten another chance, the boys studied happily and hard. They believed they had fooled the Dean.  As they arrived for the exam they were asked to sit in separate classrooms and to their surprise the 100 mark exam only had two questions. “Your name?” and “which side tire did you burst?”  The moral for these kids was that they are not the smartest.

The Wolf and The Shepherds

Once upon a time, there was a wolf who occasionally visited a village. Once he was hungry and tired, and while at the village he decided to hunt a sheep for a meal. When the shepherds realized that the wolf had killed a sheep, they threw stones at him and hurled abuses at him, making him run away from the village.

Later one night, the wolf was strolling the village again when he peered inside the shepherd’s house. To his surprise, the shepherd’s family was enjoying a roasted lamb for their meal. The wolf laughed to himself. When he had done the same he had been thrown out of the village.

This is one of famous Aesop’s fables with moral lesson for kids. It teaches us that we are quick to judge other peoples mistakes but often ignore ourselves when we do the same.

A father noticed that his son could not control his anger. He would often lose his temper and say whatever came to his mouth. His father came up with a plan. He gave his son some nails and a hammers, asking him to knock a nail into the fence each time he said something rude. The first week, he used up most of the nails. The next week he used fewer and so on, till he did not need to hammer in any nails.

Now his father asked him to remove a nail each day he didn’t lose his temper. The boy did as asked till he had slowly removed all the nails. His father then showed him all the holes left in the fence.

He taught his son a moral, that once you say something rude, you may stop doing so later, but the damage remains forever.

The Other Side Of The Wall

A young woman’s grandmother had left her a beautiful garden, which she took great care of. One day the woman was looking through a magazine, where she saw a beautiful plant and wished to plant it in her own garden. She quickly ordered it and upon its arrival planted it near a stone wall in her garden.

She took great care of it, watering it and monitoring it every day. But the plant never grew any flowers as in the magazine. She waited and waited till she was so distressed that she wanted to cut it off. However, one day her neighbor called her thanking her for the beautiful flowers blooming in her garden. Confused, the young woman rushed to her neighbor’s garden too see that her plant’s vines had crept under the wall and had bloomed on the other side of the wall!

The Man and The Cat!

Once a man was walking down the road when he saw a cat stuck in a fence, unable to escape. As the cat meowed the man tried to free it, but the cat got scared and scratched him. The man winced in pain but continued to try and help the cat. The cat however kept scratching him out of fear. Another person soon passed by and witnessing the sight, asked the man to let the cat be. However the man refused and continued to help till the cat was finally free.

“The cat is an animal and thus instinctively scratched me, but I am a human and it is my instinct to be empathetic and help the animal” the man explained to the bystander and went on with his day.

The moral in this story is to use our position to be kind and helpful whenever we can.

The Tortoise and The Bird

Another story of moral having a good lesson for children is about a tortoise and a bird.

Once a tortoise was resting under a tree when he looked above him to find a bird’s nest perched on the tree. Observing the nest, he began mocking the bird for its shabby, weak nest made of twigs and sticks. The tortoise boasted that his shell was much stronger and better.

But the bird was not bothered. “My nest may be shabby and weak but I built it myself” chirped the bird. But the tortoise continued to gloat about his shell.

“My nest may be small, but it can hold my entire family, but your shell is lonely because it only holds you” chirped the bird, tired of the tortoises’ boasting.  The tortoise realized this was true, and now felt ashamed of bothering the bird. The bird’s home may be small, but it was full unlike his big shell.

In a garden, a rose and a cactus were planted together. The rose was very proud of her vibrant red petals and her beauty and would often complain about being planted next to the ugly cactus. She would shame the cactus and ridicule it, because it was no match for her beauty.

But soon the tables turned. There came a season of drought, and no rain.  Soon the rose began to wilt and its petals began to droop. But the cactus remained the same. Birds would often come to the cactus to suck water too. Defeated, the rose requested the cactus for some water one day. Considering her own insults, she thought the cactus would turn her away but the kind cactus quickly gave her water, and they continued to foster this new friendship.

This brings us to an important moral in the story, to not judge anyone’s looks.