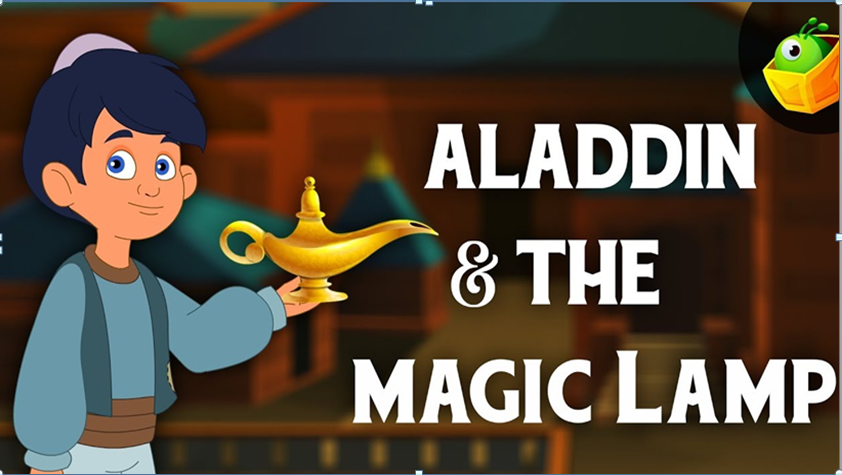 There once lived a young, careless boy named Aladdin.  He spent his days idle, playing in the streets with similar boys and not making any good of his life. His father was so distressed by his antics that he passed away and none of his mother’s advice or tears could make him change his ways.

One day as he was running around in the streets, a stranger approached him and asked him how old he was and if his father was Mustapha.

“He is sir, but who are you” questioned Aladdin. Upon hearing his reply, the man hugged him tightly and rejoiced. The stranger, who was actually an African magician, said that he was Aladdin’s uncle and had recognized him from his resemblance to his father. Aladdin was sent home to inform his mother of his uncle’s arrival.

Aladdin’s mother said she knew his father had a brother but she had thought he was dead. However, she continued to prepare supper for his uncle, who arrived laden with gifts and fruits, and wines. He apologized to Aladdin’s mother for not having shown up earlier since he used to trade outside the country. He proceeded to ask Aladdin about his occupation, upon which his mother began to cry telling his uncle about his idleness.

The stranger however said he would not let his brother’s son remain idle, and would set him up a shop with wonderful fabric tomorrow so that he may begin his trade. And so he did. The next day, Aladdin went to the market to find a shop set up for him. He met his uncle there who insisted that first, they should go for a walk around the city.

And so they did. They walked around the city till they arrived at the gates of a beautiful garden. They walked along its length till they arrived at a fountain where the magician pulled out some cake for him and Aladdin to enjoy. They continued to move onwards till they had almost reached the mountains outside the city. By this time Aladdin was tired and wanted to go back but the magician kept him going with sweet stories and tales.

As they reached two mountains separated by a narrow path, the magician stopped. “We won’t go further, I will show you something amazing, but first we must light a fire”. Aladdin collected twigs and sticks and once the fire was lit, the magician threw some powder in it that he had on him and the earth began to tremble.

As the ground trembled a square flat stone was immersed with a bronze ringer over it to pull it out. Aladdin got scared and tried to flee, but the magician knocked him down. The young boy began to cry “oh! What have I done uncle? “cried Aladdin. Seeing him scared the magician’s voice grew kinder. “All you have to do is obey me. Under this stone which has come up is a treasure, which will be yours if you do exactly as I tell you.”

Listening to those words helped fade Aladdin’s fears. He got up and lifted the square stone saying the names of his father and grandfather and below him was a trail of steps.

“You must go down and at the end of those steps is a door. When you enter there would be three big halls. Make sure you do not touch anything in those halls or you may die instantly! When you cross the halls there will be a garden with a niche. The niche holds a lamp. I want you to pour out its oil and bring me that lamp” instructed the magician.

“Give me the lamp quickly” said the magician, but Aladdin refused to give it over till he was outside.

This made the magician furious who cast a spell and closed the stone over Aladdin, leaving him inside. This man had truly revealed that he was not Aladdin’s uncle. In fact he was an evil magician who knew about the lamp from the magic books he had studied and had tried to fool Aladdin into getting it for him, but the foolish boy had failed him.

For a few nights Aladdin sat in the cave, miserable and crying over his misfortune. As he was doing so one day, he accidentally rubbed the surface of the lamp. Suddenly the lamp began to smoke up and a few seconds later a giant genie appeared before Aladdin. He was tall and blue and big. “What would you want me to do? I am the slave of your requests” he said as he bowed to Aladdin who was now his master.

“Get me out of here!” pleaded Aladdin. And just like that, the genie granted Aladdin his wish and he was out of the cave within seconds.

Aladdin rushed home with the lamp and the fruits, but he was so overwhelmed by the entire experience that he collapsed on the stairs and fainted. When he regained his senses, his mother was very scared. He told her the entire encounter and all that had happened with the magician and she was petrified to know that he had been a fraud. Aladdin requested for some food, but his mother said she was afraid there was none. Thus, Aladdin summoned the genie again and asked for some food and there it was. A lavish meal in beautiful plates and cups of silver. Aladdin and his mother feasted and kept the plates and cups for later on.

For the rest of the days, they would sell the silver cups and plates and would use the money for whatever need be. This way they lived on for many days. One day, Aladdin was strolling the market when he laid eyes upon a beautiful girl. The young woman was surrounded by guards and maids, and he soon learnt that it was the King’s daughter. He was so perplexed by her beauty that he knew in that moment that he wished to marry the princess.

The genie did as told. With seconds he built Aladdin a massive palace away from the city and brought him all that was requested. He also gave Aladdin luxurious gifts and jewels for the King.

Thus, Aladdin and his mother went to the palace and presented all the exotic gifts and goods in the palace. The King was very impressed and agreed to marry the princess to him. The two moved into Aladdin’s palace and were living happily. One day, a maid in the palace came across the magic lamp. Thinking it was an ordinary ornament, she sold it off in the market, where the evil magician was able to access it.

He called upon the genie and asked him to remove Aladdin from his palace and retrieve all his wealth and jewels. The genie did so and the next morning when Aladdin woke up, he was stranded in the middle of the dessert and all their riches were gone. Instantly, Aladdin realized he had lost the lamp. The evil magician has taken his palace and the princess away too.

The princess who was now living with the magician, disliked him greatly. One day as she was working at the palace, she looked outside to see Aladdin. She sneaked him into the palace and was very glad to see her husband. The two of them came up with a plan to get the lamp back, which the magician carried in his coat.

That night, the princess who had normally disliked the magician, greeted him warmly. She gave him dinner, but little did he know it had been drugged. As he ate, he felt drowsy, but the princess led him on to eat more and more with her sweet words till he had passed out completely. That is when Aladdin snuck in again and got his lamp back.

He summoned the genie, requesting him to return everything to normal and banish the magician to a far-off land from where he could never escape. The genie did as asked, and Aladdin was returned all his riches and his palace and the magician was never able to bother him and his princess again.

Beauty and the Beast is our next story.