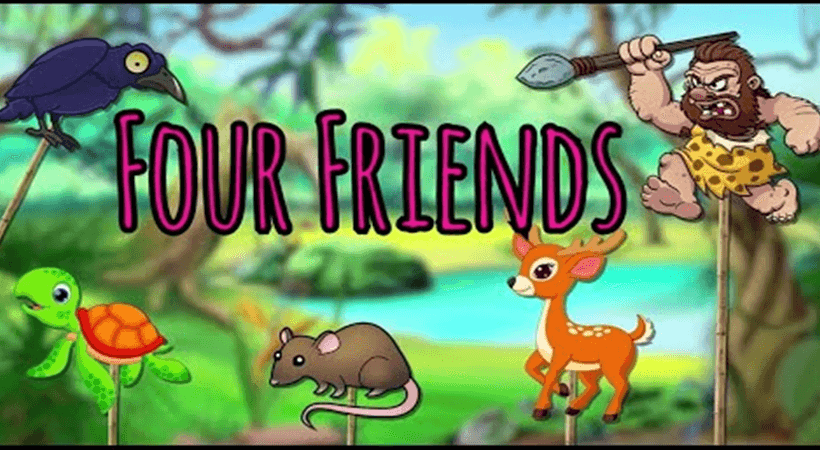 Far off in a jungle lived four friends- a mouse, a deer, a crow and a tortoise. They would spend all their time together and enjoyed each other’s company.

One day a hunter saw the four animals as they were walking around in the jungle. As soon as the deer noticed the hunter, he informed his friends and ran off. The crow also flew onto the nearest tree and the mouse retreated into a nearby bush. But the poor tortoise walked slow and could not escape in time and thus the hunter quickly cast a net over him and caught him. The hunter was sad that the other animals had escaped but he was glad he had at least caught the tortoise and would not remain hungry.

The crow, the mouse and the deer could not watch their friend suffer and came up with a plan to get their friend back. So, the crow flew all over the forest to track the hunter. Once he found him, he let the others know.  The deer went next. He lay on the ground and pretended to be dead. The hunter thought that he could easily catch the dead deer for a meal. As he put the tortoise down to catch the deer, the mouse went and nibbled on the net, setting the tortoise free.

As the hunter approached, the deer got up and quickly ran away. The hunter had been fooled. “At least I still have the tortoise” he thought to himself. But as he returned, he saw that his net was empty too.

The four friends had used great team work to free themselves and continued living happily in the jungle.

You can find the story about the Elephant and the Dog next.

The Elephant and the Mice