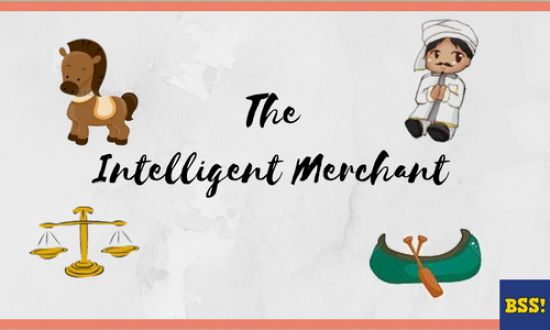 There was once a massive Kingdom ruled by an unjust King. The King did not care about his people at all, and only focused on his own material benefits. His government was equally corrupt and the people were very unhappy. In his palace was a merchant who was famous for being outspoken and would often get in trouble for speaking his mind. Due to this quality, almost everyone disliked the merchant.

One day all the King’s consorts were meeting in the court when the merchant expressed his opinion. “If a man is smart enough, he can overcome any obstacle.” nobody really liked the merchant and so they expressed dislike for his opinion. The King was also very annoyed and decided to punish the merchant. He ordered that the merchant should be placed in the stable with all the horses and will not be allowed to get out till he earns a hundred coins.

He started to weigh the horse manure. The care takers of the horses thought he had lost his mind. Why was he weighing the waste? This went on for a couple of days and soon the merchant confronted the care takers. “I have been weighing the dun and it seems to have reduced in weight, which means you have been feeding the horses less. I will have to report to the King about this.” the caretakers had been unfairly selling some of the horse food. They were now afraid of being told on.

They begged the merchant not to tell the King and agreed to pay the merchant and feed the horses properly. Thus, within a month, the merchant had earned a hundred gold coins and it was time for him to get out.

But the King was not done testing him yet. This time he sent the merchant to a riverbank and told him that he must earn a thousand coins before he could return. Once again, the merchant took his weighing scale with him. Upon arriving at the bank, he began to weigh the water. The boatsmen who were taKing passengers along the river were amused by his antics. They asked him why he was doing so.

“The King has asked me to weigh the water. If it appears to be heavier than it should be, I will inform him that you are carrying more passengers than you are allowed to.” The boatsmen had in fact been carrying more people than they were allowed to. They begged the merchant not to tell the King as he would be very angry and agreed to pay him some money.

Thus, the intelligent merchant began to charge the boatsmen and within no time had earned a thousand coins and thus appeared in front of the King. This time the King was amazed and believed the merchant, that if a man is intelligent, he can get out of any circumstance.

The King and The Drum is the next story on the list.