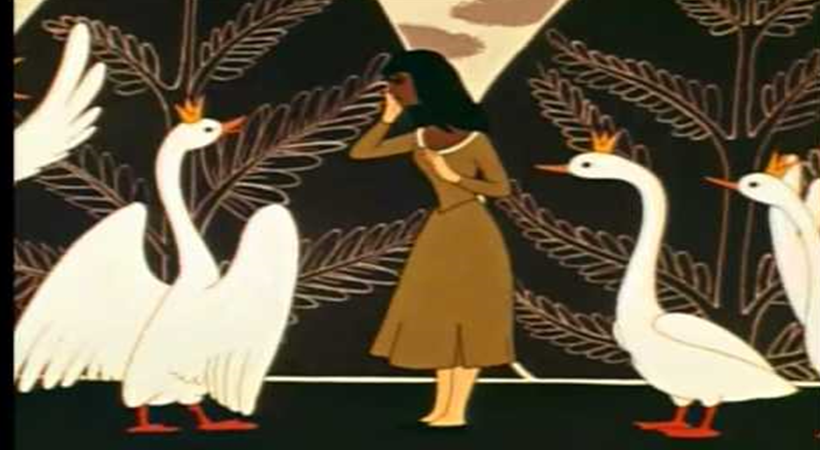 Once upon a time there lived a King who loved to go hunting. One fine evening he was with his men in the forest when he spotted a wild boar. He began to chase after it, going so far and far that none of his men could follow him in. When he finally caught the boar, he realized he could not find his way out. He began to panic. As he searched around the forest, he met an elderly woman who seemed almost like an enchantress. The King became scared, but the woman agreed to show him the way out.

“I will show you the way out, but you must fulfill one condition” she said. The King who feared for his life said he would fulfill it. “I have a daughter who is young and beautiful. You must take her with you and marry her and make her the queen, if you want to leave the forest.” The king had already agreed.

So the woman took the King to a cottage deep within the forest where her daughter was. When the King saw her, he couldn’t deny that she was beautiful, but there was something oddly chilling and eerie about her. But since he had already agreed, he took the young lady to the palace with him and married her.

The King already had seven children from his previous wife, who had died. Out of the seven children, six were boys and one was a girl. The King loved them very much, but when he married the young woman, he was afraid that being a step mother to them, she would treat the poorly. So, to protect them, he kept them in a small palace deep in the forest. It was so hidden from the outside world that the King himself would lose his way if it wasn’t for a thread an elderly woman had given him in the forest which he used to mark his way.

The stepmother was furious and jealous. She could not think of sharing her husband. That night she made little silk shirts for the children, casting a witchy spell on each. The next day she set out, following the thread to the palace in the forest. When the children saw someone approaching the palace in the distance, they thought it was their father and they rushed out to meet him. But the little girl stayed back inside.

As the step mother approached she quickly put the cursed shirts on the little kids and they turned into swans. The mother thought that she had gotten all the children and thus left, leaving the little girl behind.

That night when the King arrived, he was terrified to see his children missing. The little girl began to cry and told her father everything that happened and even showed him the feathers. The king was grieved but did not think the Queen would have done so. He wished to take his daughter with him but she refused scared of the Queen. So, she stayed the night in the palace.

The next day the young girl set out to find her brothers. She went deeper and deeper into the forest till there was only wilderness in sight. She came across a cottage. When she entered there were six beds inside.  Hoping her brothers would return there she waited till in the evening the six swans flew in and took off their shirts and turned back to her brothers.

The girl was overjoyed, she hugged her brothers glad to see them. “We are able to turn back to human for half an hour a day, after that we must put back our shirts and turn into swans or the spell will destroy us”. They told their sister. She asked them how she could turn them back and lift the curse. “The conditions are insanely difficult. You must not speak for six years and must make us shirts from stitch weed during this time. If while making the shirts, you end up saying a single word, the spell will remain forever”, the girl was ready to take on any challenge for her brothers. They then asked her to leave quickly before the enchantress who lived in the cottage returned and she went off, back into the woods.

The young girl took it upon herself to save her brothers. She collected stitch weed all day and at night sat perched up on a tree top starting her weaving. Days went by when one day the King of a foreign country was passing by and he saw the young girl sitting on the tree. “Who are you and why are you up there?” he asked, but she could not answer because of the conditions. The king and his men continued to question he but she remained dumbfounded.

But the king had been moved by her beauty, and innocence and wished to marry her. Thus, he took her with him and made her his queen. The kings mother however was not very happy with the marriage and was an evil woman. She kept asking the king that why had he trusted her, since she could be an evil enchantress or anyone, but they would never know because she never spoke.

Thus, she tried to get rid of her. When the couple had their first child, she hid it away and smeared blood all over the Queen’s mouth and accused her of eating her baby. However, the queen could not say anything in her defense. The King refused to believe his mother as he knew that his Queen was not capable of such an act.

When the couple had their second child, the evil mother did the same. She hid the baby and accused the Queen again. The King could not bear the loss of another child and began to question his wife. He decided that the court would make a decision. The court ruled that the Queen should be killed and burnt by fire.

The day arrived when the Queen was to be killed. That day six years had been completed since she started weaving. She had made all the shirts but the sleeve of one was left but she could not finish as she was to be burnt. She began to cry and held onto the shirts as she was taken to a ground.

As she was about to be lowered into the fire, she held onto the shirts, and saw that six swans were flying towards her in the sky. It was her brothers and they flew by her and she put a shirt on each one, and they turned back to their true boy form. The last brother however had a sleeve missing on his shirt and so one of his arms remained a wing.

The Queen rejoiced and began to speak as the period of silence was over. She explained everything to the King, who was more than relieved to hear his wife and saved her from the fire.

The evil mother was banished, and everyone lived happily ever after.

Wind and the Sun is the next story waiting for you.

The Mice That Ate Iron Story