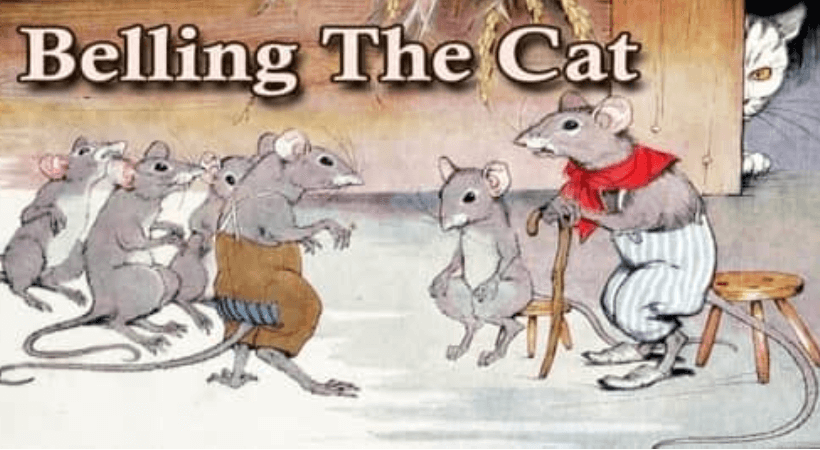 In a house there lived a group of mice who were tired of the cat. The cat would chase them around all evening or whenever they came out of their hole. Sometimes the cat would catch the mice and play with them, in preparation of eating them, till they had to break away from her. They knew that they needed a strategy to somehow try and control her.

So all the mice gathered for a meeting and decided to come up with a plan for the cat. They brainstormed over so many ideas. They came up with plans like building a cage or putting up a trap but none of them were ideas they could actually implement. So they called off the meeting and went back to their holes.

One of the mice, called Freddy, kept thinking about an idea all night as he tried to sleep. Suddenly he came up with the perfect plan! He got up and started searching for the things he needed. He would present his idea in their meeting tomorrow and he knew that everyone would be amazed by it. So that night he collected the stuff he needed and made his way to the meeting the next day.

The next day the mice gathered again and Freddy came forward. He showed everyone a bell hanging in a long thread. At first all the other mice were confused. But then Freddy explained that all they needed to do was to tie this around the cat’s neck so that whenever she was around the ringing of the bell woulf let the mice know and they could run to save themselves.

This was such a simple, but such a good idea that the mice began to cheer for Freddy. They tossed him in the air, celebrating his plan, and now they were ready to take the cat head on. But there was just one problem.

Who would put the bell around the cat?

Nobody wanted to take that responsibility and face the danger. Thus a very brilliant idea was in fact not so brilliant because it could not be carried out, and thus the mice had failed once again in coming up with a plan.

Moral: Saying something is one thing, but actually doing it is another.