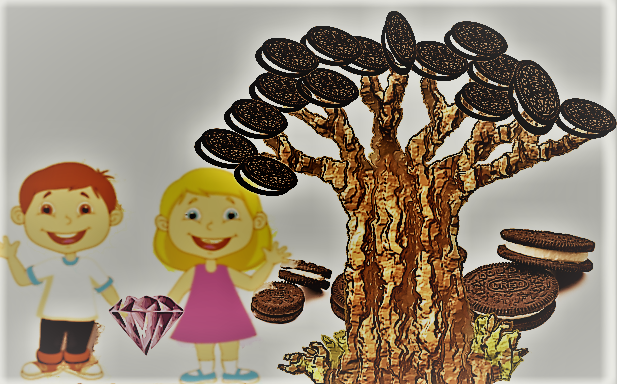 Three little kids of age 5 at the supper time had tea along with oreo biscuits. They all love to have Oreos.

While enjoying supper one of them stated: ”In today’s class at school my teacher asked everyone about their dreams and I replied I want to become a spiderman. What your dreams are?”

The remaining two said ”umm. We haven’t figured out our dreams yet.”

The third one said: ”It’s so easy to figure out just think  about what you love the most.”

Third one: ”Woahhh! You just figured it out.I’ve always seen you two are deeply in love with oreos but ……”

Two of them:” Yes, they are incredibly delicious but how can someone have a dream about them We can’t become a biscuit.”

Later at night two of them named Jack and Bella had a conversation.

Jack:”You really don’t have any dream yet?”

Bella:”No,but sometimes I wish we’ve a place full of oreo”

Jack:”I understand we’re oreo lovers but there’s no such place like that.”

Bella: ”Just imagine the place where everything is made up of oreos and you can eat as much as you can.”

The next morning they both went out in a garden and had their eyes on a stone that was shining so bright. They both looked at each other and wonder why it is so shiny.

It was really a magic stone and their dream was fulfilled when they saw themselves in an oreo world.

They looked at each other and said:” Is it real?” They were extremely delighted on seeing mountains, trees, waterfalls, grass, candies, and everything was covered with oreo.

Bella:”Look here jack! Oreo ice-cream and we can eat it as much as we want.”

Jack:”Bella have you seen that waterfall of oreo chocolate.Let’s go and have some”

They played games ,ate a lot of oreo made stuff and enjoyed.

It was night now and they wanted to go back home.

Bella:”I thought you have a stone”

Jack:” You’re so much irresponsible.Get up!We’ve to find it immediately.”

They both divided places to find stone.

Suddenly a shadow covered Bella.She got scared and looked back and her body started shivering.She saw an old horrible,tall lady gradually coming towards her and when she came close to her she grabbed Bella’s neck and Bella shouted:”JACK JACK ,THIS LADY IS KILLING ME”

Her eyes opened and jack said:”What happened ?Why you were screaming?”

Jack:”What you saw in a dream?”

Bella:”I saw that we’re in an oreo world.”

Bella told her dream to jack.

Jack laughed and said:”Hahaa ! It was a nice but unrealistic dream by the way”.