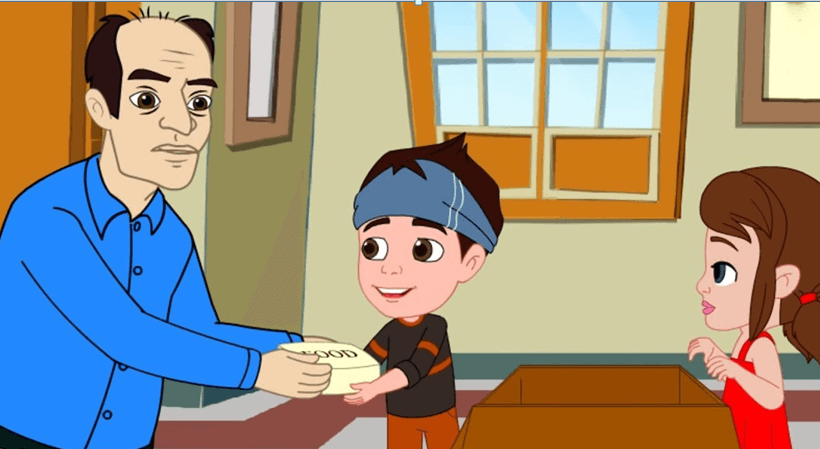 Piggy , piggo and a goat

Under a green thick tree, two pink colored pigs named piggy and piggo were sitting, talking, and enjoying. After a while, they saw a little white goat trying to pluck leaves from the tree but the goat’s height was short.

Piggy, a kind-hearted pig on seeing goat moved to help her and piggo, a selfish pig said:” Why are you trying to be so nice? Her mother will come to help her.”

Piggy:” Don’t you see she’s alone. No one is with her. We have to help her.”
Piggy climbed the tree and pluck leaves for her.

Goat cheered up and said:” I was starving. Thanks a million.”

Later piggy to piggo:” I helped the goat because my grandma always says if we help others then others will also do the same for us. Helping others is a thing everyone should do.”

Piggo:” yes, that’s a good thing but helping a goat was of no you use. She was unable to pluck the leaves but I can climb and I’ll never need anyone to pluck leaves for me. Huh!”

Piggy:” You won’t understand my point. Leave it”

Next week on Sunday morning, it was a very hot day. They both went to find some cool place.

While walking they saw a hunter. They both looked at each other and said: ”He’s going to kill us “. They ran and shouted:” Save us! Save us from the hunter “

The white little goat saw them shouting so she told her mother about how piggy helped her and requested her to save them.

Mother said: ”Oh! that’s so sweet. We’ve to help them but there are two pigs and your father is also not here. How will I save both of them and I also have to take care of you. It’s impossible for me to save all three of you. Well, let’s come with me.I’ll try.”

Mother goat holding a little baby goat went to save the pigs but the situation worsened.

The hunter tried to catch all the four of them.

They all got scared and the mother goat shouted: ”Follow me, I’m here to save you pigs from this hunter.”

Piggy:” Dear piggo! don’t leave me alone I can’t run as fast as you can. I’m scared of this hunter“.

Piggo looked back at piggy and said: ”Okay. don’t worry”. But piggo didn’t care about piggy and only focused on how to save himself.

The goat also got tired of running and began running slowly.

Then they heard a gunshot and it was a hunter who was shooting at them. The first didn’t hit anyone fortunately but mother goat saw the hunter’s second shot is more likely to hit them.

The little goat saw perplexing expressions on her face of how to save both pigs. The little goat screamed: ”Hurry up Mom. Save the slow runner piggy. He was the one who helped me.”

The goat immediately pushed piggy on the left side to save him from the hunter and the bullet hit the piggo’s leg.

He got injured and realized he wasn’t in the favor to help a little goat and neither care about piggy’s slow speed. His egoism made him lose his freedom and now he has his life in the hands of a hunter.

At that very, moment piggo said to himself:” Piggy you were right if we help others then others will also help us.

It was you who was always willing to help others while I was just a self-centered pig.”