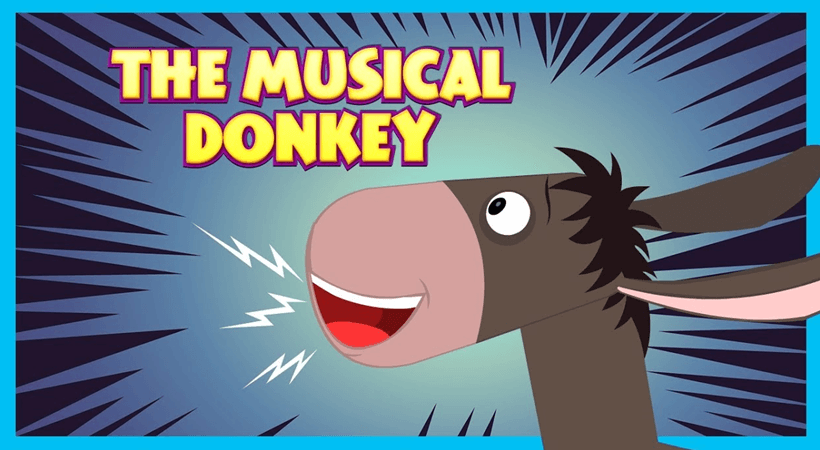 Once upon a time in a far-off village, an old farmer lived with his donkey. The donkey would work on the farm with his owner day and night. He would carry heavy logs on his back when the shepherd farmer to move them. He would carry the plough on his back to prepare the fields. He would also carry the farmer around on his back when he needed to go to the market. But the donkey was not happy with the food the farmer gave him. He would often have an empty stomach and his belly would grumble all night from hunger.

One night, the donkey was strolling outside the farm when he met a jackal. The two of them exchanged greetings when the jackal told him he was looking for food. The donkey, who was also hungry that night, agreed to join the jackal in his hunt for food. The two of them went around the village till they came to a corn field. Quietly sneaking in; the jackal and the donkey ate as much corn as they wanted, and sneakily left with a full stomach.

The next night, the jackal arrived again, and the donkey joined him to the corn field. The two sneakily ate some corn again and left before getting caught. Now the villagers were very concerned about who had been eating up the corn.

The next night, the donkey and jackal made their way to the field again. They got in and feasted on the corn. The donkey ate so much that night that his stomach was very full. He was happy to be feeling this satisfied and wished to sing in joy. But the jackal warned him against doing so.

The donkey did not listen to jackal because he was so content that night, and against his friend’s wish, began to sing loudly, freely and happily. The jackal began to panic seeing this, and quickly snuck out of the field. The donkey had not realized that the farmer had hired a guard for his corn field.

When the guard heard a donkey, he quickly rushed to the field and began to beat the donkey, who was the culprit of eating the corn. The donkey realized that he should have thought his actions through before acting on them and now had to suffer the consequences.

Moral: Think before you act.

Find the next story about Starfish