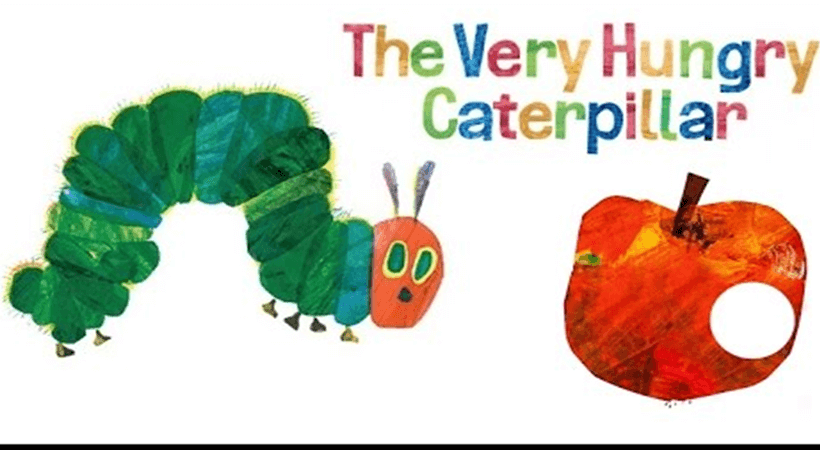 One fine evening as a small egg lay on a leaf, a tiny caterpillar hatched out of it. As soon as it came to the world, the caterpillar began to search for some food. On its first day it ate some apples, but it was still super hungry.

The next day, which was Tuesday, the caterpillar fed on some pears, but still his hunger did not go away. On Wednesday he ate three plums and on Thursday he ate some strawberries but both days, he was still hungry.

On Friday, the caterpillar ate five oranges, yet still, he remained hungry.

On Saturday however, the caterpillar had a feast. He ate through an ice cream cone, a slice of cake, a pickle, some cheese, a sausage, a cupcake and some watermelon.  But after all this food, the caterpillar got a tummy ache.

The next morning, on Sunday, the caterpillar ate a big, fresh, green leaf and felt so much better. Now finally he wasn’t hungry either. But over the week he had turned into a big fat caterpillar.

The caterpillar began to build a cocoon around him and stayed in it for two long weeks. As time passed, he began to nibble on the cocoon and pushed himself out till he came out as a big beautiful butterfly, with lovely multi colored wings.

Moral: every animal has its own food chain.

Enjoy the next story about the Elephant and the Mice.

Lily and her Nightmares