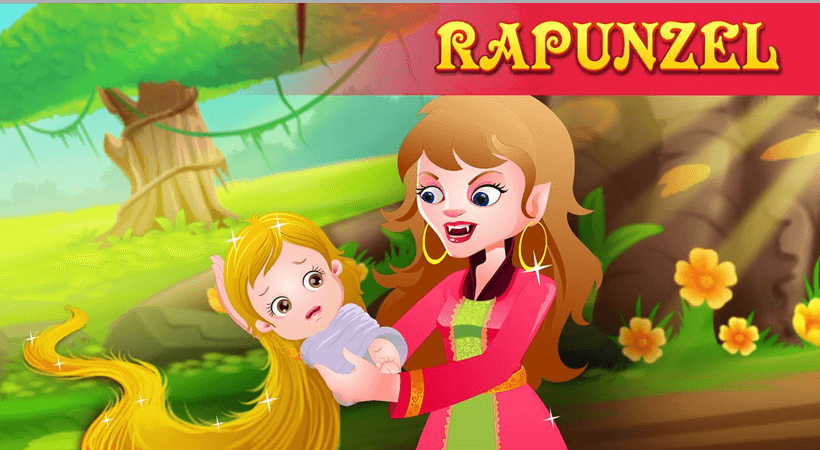 Once upon a time, there lived a couple who was desperate for a child. There was nothing they wanted more than to have a little baby of their own. They lived in a house in a secluded land and from the highest window of their house; they could look into a beautiful garden. But no one could enter the garden because there was a high wall all around it.

One day as the woman was peering into the garden, her eyes landed on a vegetable patch in the center of the garden. The sight of fresh Rapunzel vegetables growing on the patch made her mouth water and she called her husband to come quick.

“If I do not eat some of that vegetable, I will die,” she said. The husband who loved his wife very much decided that he would go get his wife the vegetable no matter what it cost.

But the garden belonged to an enchantress and there was danger in going in. however, the husband still went. As the sun began to set, the man climbed over the wall and got some Rapunzel for his wife. That day she enjoyed a tasty salad made of vegetables.

But the next day she wished for more. So her husband snuck into the garden again, but this time the enchantress caught him. She was furious “How dare you to steal my vegetables! This will cost you your life!” she said angrily.

But the husband pleaded with her to forgive him as he had only done so out of love for his wife. The enchantress softened up a bit and said that he would still be punished “You will have to give me your firstborn as soon as the child is born. I will treat it as a mother but you will not be allowed to see it” she demanded. The husband agreed to everything scared for his life. And so, the enchantress gave him the vegetable and let him off.

When the couple had their first child, the enchantress arrived and took her away. She named the child Rapunzel and kept her in a faraway land, up in a high, tall tower, with no door and just a window. As Rapunzel grew up, she had the most beautiful, long hair, and whenever the enchantress had to go up the tower she would say;

“Rapunzel, Rapunzel, throw down your hair!”

Rapunzel would throw down her hair and she would climb up. But as Rapunzel grew older she became lonely and often wished for some company.

One day, a prince was riding by when he saw the tall tower. As he got closer he heard someone singing in a beautiful melodious voice. It was Rapunzel. To kill her time in solitude she was singing and could be heard. The prince tried to find a way into the tower but there was no door. He left that day but would often return to listen to the girl singing.

“Rapunzel, Rapunzel, throw down your hair!”

Rapunzel throw down her hair as asked, but as the prince climbed up, she realized it was not the enchantress. At first she was terrified of the stranger, but he tried to soften her up. He spoke to her like a friend and told her how he had heard her sing and since then had been restless. Told her about his palace and stories of his journeys and soon Rapunzel began to trust him.

As they got to know each other better, they fell in love and they made a plan for Rapunzel to escape the tower. She said he should bring her a piece of silk each time he visits so that she can tie a rope and use it to climb down the tower so they can marry. And thus, so did the prince.

However, one day Rapunzel accidentally told the enchantress. “How are you so much heavier to pull up, than the prince,” she asked. The enchantress was so angry. “I had distanced you from the outside world but you have deceived me!” she cried out. In a rage, she wrapped Rapunzel’s long locks around her arm and chopped them off. “I will banish you to a far-off desert so that you can never meet the boy again!” she said as she cast a spell on Rapunzel making her disappear.

The next day when the prince arrived, the enchantress threw down her hair and climbed up, but he was shocked to see that, it was not her up there, but an evil witch.

‘Aha! You are here for Rapunzel but she is no longer here! Your lovely bird is not in her nest and she is suffering an ill fate and you shall too!” the enchantress cried out.

The prince was terrified. He quickly escaped the tower saving his life but landed on a cactus bush which pricked his eyes and he was blinded. His heart was shattered. He spent many years searching for Rapunzel but to no avail. He would roam around like a mad man, and in doing so, he arrived in the desert one day. Soon he heard the same melodious voice he had heard years ago and followed it. It really was Rapunzel, living life in wretchedness. As the prince arrived Rapunzel got up to embrace him and began to cry. Two of her tears fell over his eyes and magically healed his blindness.

They rejoiced over having been reunited and the prince took her back to the palace. They married and lived happily ever after.

The Hungry Caterpillar Story is waiting for you.