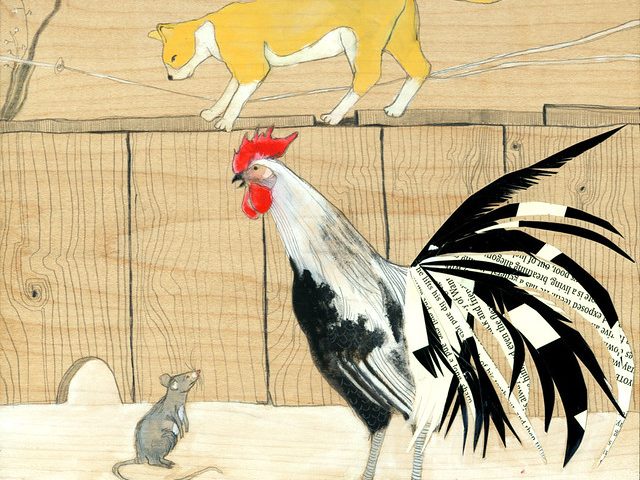 A very young mouse went out from the place where it used to live. It had never been out from its house before and had never seen anything of the outside world. But, when he completed his journey, he was almost grieved. When he came back to his house, he told his mother all about his adventure.

He told his mother that he was strolling around peacefully. And just when he turned around the corner into the next yard, he saw two strange creatures. He further told his mother that one of those creatures had a very kind and graceful look. Whereas the other one was the most fearful creature she could have ever seen.

The young mouse started to tell his mother about the terrifying creature. He told her that on top of its head and in front of his neck, there were meat pieces hung. The creature walked restlessly, beating up his arms on sides savagely and tearing down the ground with its toes. When the creature saw me, he opened his mouth and the young mouse thought that he will swallow him. But the creature didn’t swallow him although made a very piercing noise that made the young mouse scare to death.

After, hearing all this, the mother told him that the gentle creature that he saw was no one but the cat. Under the kind appearance of the cat, it bears a grudge against them and wants to kill them. Whereas the other creature was nothing but a bird who would not harm the young mouse in the least.

Find our more short moral stories and cat stories like this by exploring our bedtime webstie story.