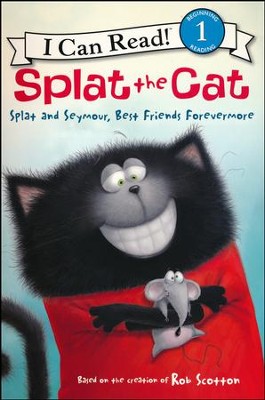 There was a cat, named Splat. Splat had a pet mouse who was his dear friend. It was the morning of Splat’s first day of school. He was very nervous when he woke up the morning of the first day of his school. When he went downstairs to get ready for school. He was trying different excuses to stop himself from going to school as he did not have any friends. But his mother insisted him go to school no matter what.

So, before heading off to school, he put his little mouse friend, Seymour, in his lunch box to have his friend with him at school. After arriving, Mrs. Wimpy dimple, who was Splat’s teacher, welcomed him warm-heartedly. She introduced him to everyone in the class and started teaching. She taught the students that they were cats and they were amazing. She continued and told them that the cats are clever, cunning, and quick.

At lunchtime, when Splat opened his lunch box, Seymour came out. After seeing Seymour, the cat classmates started chasing him because that’s what cats do. Splat tried stopping the classmates to stop but no one did. So, the teacher shouted “STOP!!” and everyone stopped. The teacher called out for milk time and everyone excitedly went for the milk. But the milk door was shut and nobody could open it so Mrs. Wimpy dimple announced that there will be no milk for today.

Just then, Splat whispered something to Seymour’s ears and Seymour nodded. A moment later, Seymour opened the milk door and everyone got milk. After that, the teacher taught the cats that cats don’t chase mice!!! Read more cat bedtime stories.