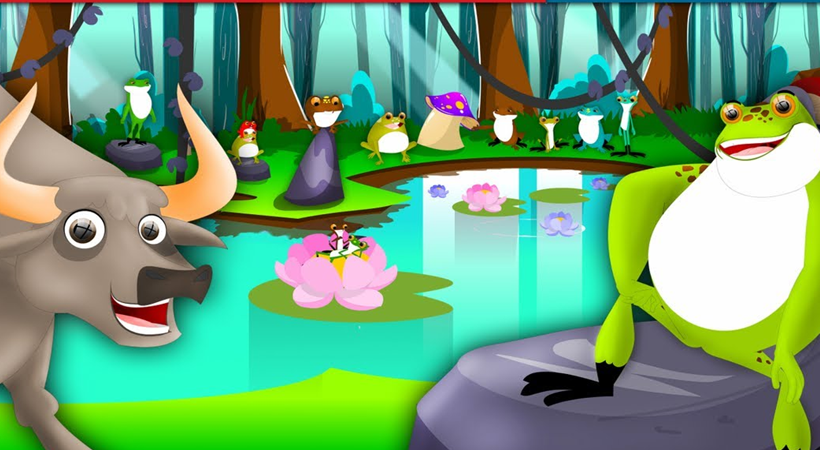 On the outskirts of town there once was a pool of water. Many frogs large and small used to live in and around the pool. They would hide under fronds and hop onto lotus leaves large as dishes.

Every evening, cattle would return to their homes raising dust sky high. The ground would shake under the frogs and the cattle seemed like monsters to the trembling frogs. Their croaking would stop till the cattle passed.

One evening, a tired and thirsty ox waded into the pool. As he walked into the pool, he did not realize that a little frog had gotten squished under his hoof. The little frog’s friends hopped away croaking loudly.

After the ox left, the little frogs approached a large old frog. They sobbed, “We saw a large monster today. It killed our friend.”

“Monster? A large one! Was it bigger than me, little ones?”

“Way bigger than you!”

The frog puffed himself up in annoyance and snapped, “This big?”

“No, much bigger,” claimed the frogs.

“You have not lost your tails yet, you tadpoles! Everything seems large to you,” croaked the old frog.

Now the little frogs laughed out loud, “We may be young and small, uncle, but you cannot ever be as big as that monster.”

This enraged the old frog. He puffed himself up and spread his front legs and puffed out his chest. But this time he had gone too far. He burst into pieces as the little frogs looked on in horror.

Moral: Not all creatures can become as great as they think.

Previous: The Boy and the Filberts

Next: The Wolf in Sheep’s clothing