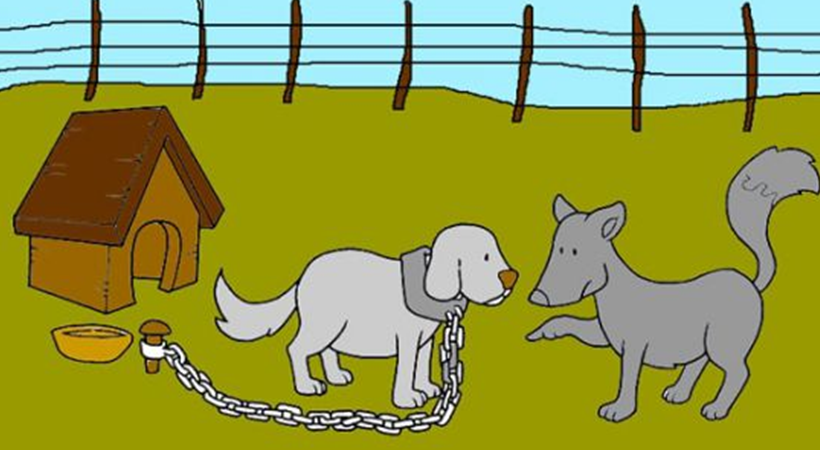 A wolf was very skinny and weak because all the dogs in the village would get all the food and would always stay on the lookout for him.  thus, the wolf was very distressed and weak.

One night, as the wolf was resting in the forest when he saw one of the dogs from the village, who had strayed too far from his home. At first the wolf wanted to eat him up, but the dog was almost double his size. So, he went forward cautiously and complimented the dog’s appearance and health.

“You can be just like me too” replied the dog. He instructed the wolf to chase off crows, look out for thieves, bark away beggars, and people shall start feeding him tidbits and leftovers.

The wolf listened carefully, and as he did so, he noticed that the dog had very terrible marks around his neck. The wolf asked the dog why they were there. At first the dog refused to tell, but as the wolf probed him further, the dog told him that they were from where his collar was chained.

“Chained? Oh no, I wouldn’t trade my freedom for all the food in the world” growled the wolf as he ran off into the woods.

There is truly nothing sweeter than liberty.

Previous: Two Travelers and a Bear

Next: The Wolf and The Shepherd