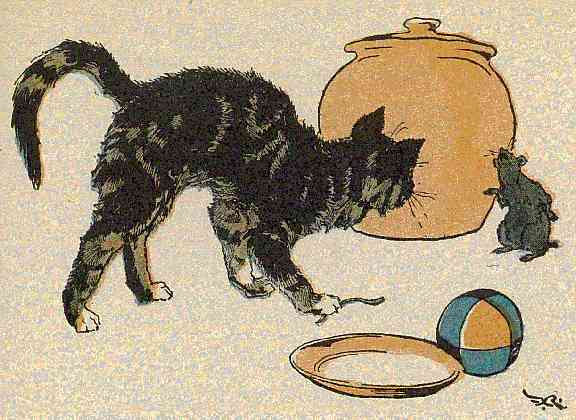 Once upon a time, there was a very watchful cat who used to keep eye on the mouse that they hardly dare to be around him. The cat was very watchful that the mice were afraid that it may kill them the second it gets a chance. The cat seemed to be everywhere ready to catch the mice. At last, the mice, afraid of getting eaten alive, started to live as much close to their den as possible. Therefore, the chances for cat to catch the mice were getting lesser.

So, the cat started to make wits to catch the mice. One day, the cat climbed up on a shelf and hung himself upside down, trying to make himself look dead. When the mice peeped out of their den and saw the cat in that position, they thought that the cat was just only there for punishment. But the mice went closer to sniff and check for the cat’s movement. As there was no stirring, they thought that the cat was dead. After realizing this, they were very happy and started to celebrate its death.

Just when the mice became free of concern, the cat grabbed two to three of them and made them its food. The other ones ran for their life and got back to the den. After this incident, the mice tried staying at their den more strictly. But the cat was still hungry and wanted to have a meal so he came up with another idea.

The cat rolled himself in a flour bag, turning completely white, and laid down in a flour bin. Sure enough, the mice started to come out and the cat was already feeling some mice in its claws. But an old rat, full of experience of traps and tricks, knew the cat’s trick. He warned the other mice to be careful, not be deceived by a heap of flour as a meal, and to keep a safe distance.