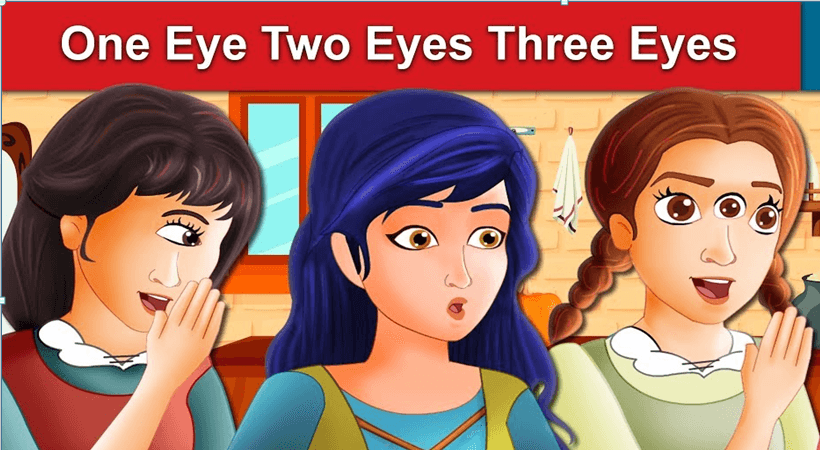 An elderly woman had three daughters. The eldest one had one eye in the middle of her forehead; the younger one had three eyes, while the youngest had two eyes like normal people. The woman had named her daughter according to the number of eyes they had.

Since Two eyes looked like every other normal person, the mother and her sisters would ridicule her and make fun of her. She was treated badly and made to do all the chores. She would clean the house, cook the food and look after the goats. Some days they would not give her food either.

One day as Two eyes took her goats to the forest, she met an elderly woman. That day she was hungry and sad because her sisters had not given her a single piece of food.  The old woman came up to her and told Two eyes to sing a song to her goat and food shall arrive for her. So, Two eyes sang as follows “weak goat, bleat goat, bring me tons to eat”. As soon as Two eyes sings, lots of food appeared before her and she enjoyed a fulfilling feast, eating all day long.

When she got home, her sisters put some food in front of her but she does not eat it. Days went by and Two eyes did not eat the food she was given. Her sisters believed that she must have found some other way to get food. They told their mother who asks One eye to follow her to the forest the next day.

When they arrived at the forest, Two eyes was hungry. So she sang a lullaby to her sister who fell asleep. As her eye closed, Two eyes sang to the goat and an amazing table of food appeared before her.  She ate till her heart’s desire and when she was done, she woke up One eye and they headed back home.

One eye tells her mother how she had fallen asleep and thus hadn’t seen anything, so the next day their mother sends three eyes. When they arrived at the forest, Two eyes sang a lullaby to her sister, who fell asleep but one of her eyes remained open. Two eyes did not notice this and when she got her food, three eyes found out. When they got home, three eyes told everything to their mother, who was horrified.

They took away her magic goat, who she sang to and leaving her sad. The next day Two eyes went to the forest and the same woman was there. “Do not worry, take this seed and plant it in your garden. It will grow over night into a beautiful tree. Sing to it ‘oh great apple tree, I am Two eyes, come to me’ and it should give you incredible gold and silver apples”. Two eyes did as said and when she woke up in the morning, a huge tree had appeared in the garden. Her sisters and mother tried everything to get its fruit, but could not. It was only when Two eyes sang to it did it drop the fruit.

Her sisters became jealous of her and locked her up in a room. Two eyes was sad and distressed and cried the nights away until one day a prince appeared in their garden. He had been passing by and had spotted the magnificent tree. When he asked who it belonged to, three eyes and One eye lied it was theirs, and tried to take some fruit off for the prince, but could not do so. They were embarrassing themselves in front of the prince. Soon the girls had no choice but to bring out Two eyes forward who was the only one who could give the prince some fruit.

“May I have some fruit so I can take it back to the palace” asked the prince. Two eyes happily agreed and gave some to him. The prince was very impressed by Two eyes generosity, and asked her if she would like to go with him for the rest of the voyage. She happily agreed and left with the prince, leaving her evil family behind, but forgiving them for their mistreatment.

The Two soon fell in love and married and began to live in the palace. But one day Two eyes felt sad about her tree. She looked out of the window remembering it, when she was shocked to see that the tree was outside in the palace garden. It had followed her there. Now she was happier than ever.

Moral: Treat everyone politely and be generous.

Positive and negative thinking is important. Here is a story about Positive and Negative Thinking.