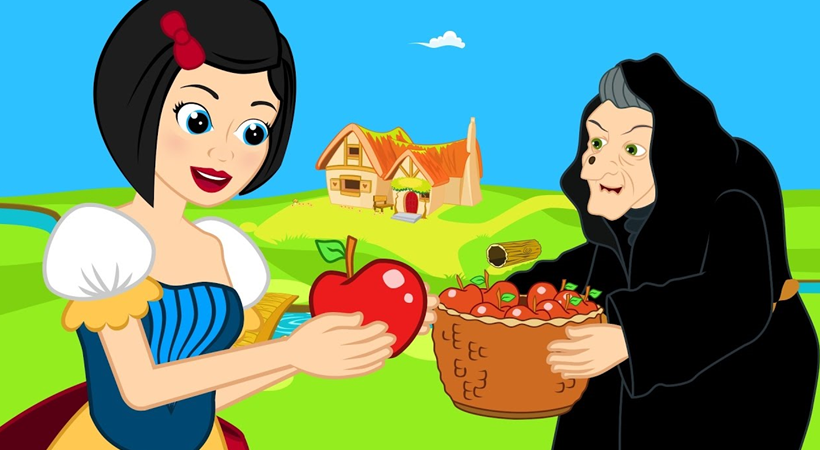 Once upon a time there was a Queen who was sitting in her court one day as it snowed outside. As she was weaving some clothes, the needle pricked her finger. A drop of blood fell on the snow from her finger. The dark blood looked so beautiful against the snow, that the Queen thought to herself, what if she had a beautiful daughter, with skin as white as snow and her lips as red as the blood and hair as black as the darkest forest wood.

A year later, the King and Queen had a beautiful baby girl. She was beautiful as a baby and as she grew up, she was even more charming in her adolescence. However, the Queen did not live long enough to see her daughter grow up. She grew ill when she was just a child and passed away.

The King soon remarried, but the new Queen was a selfish and could not tolerate anyone else being more beautiful than her. She had a magic mirror which she looked into every day and would ask it;

“Mirror, mirror on the wall! Who is fairest of them all?”

“You are a beautiful woman no doubt my Queen, but Snow White has surpassed anyone in beauty.”

The second the Queen heard this, she became envious and jealous of the young girl. She could not stand anyone being prettier than her and decided that she would get rid of snow white.

Thus, she hired one of her most trusted men to kill her. She set Snow White off with the huntsman, and they rode to the forest. The huntsman pulled out a dagger and put it against Snow White’s chest but as soon as he did so the young girl began to plead and cry.

“Please let me go! I mean no harm.” cried Snow White. The huntsman’s heart melted and he decided that he would not kill her. He left her in the forest and believed that the beast would kill her anyways.

Soon as she continued through the forest, she came across a hut. To protect herself Snow White went inside. There were seven tiny beds in the house. Snow White ate some of the fruits on the table and fell asleep to rest.

Back in the palace, the Queen looked into the mirror once again.

“Mirror, mirror on the wall! Who is the fairest of them all?” she asked.

“Oh Queen, you are a beautiful woman, but beyond the forest, in a small cottage, Snow White is alive and well. She has surpassed you in fairness and beauty still.” replied the mirror.

The Queen was furious, she now came up with another plan to rid herself of the young girl so she could be the most beautiful woman.

When Snow White woke up, she was met with seven sets of eyes staring at her. She had not known that she had trespassed into the house of seven dwarfs. At first, they were very angry at her for breaking in. But soon Snow White became friends with all of them and they began to live happily. Snow White helped them around the house and cooked and cleaned for them while they went out to earn and they all became great friends.

One day, a woman arrived at the cottage while the dwarfs were at work and Snow White was alone. She was an elderly woman and carried a basket with her. When Snow White opened the door, the woman greeted her.

“Oh, dear girl, if you could lend me a glass of milk, I will give you a delicious crisp apple in return” said the old woman.

Snow White was happy to lend her the milk, but what she didn’t know was that the old woman had been sent by the queen and the apple was in fact poisonous. As the old woman gave Snow the apple, she took a bite and instantly fell into a deep sleep, which was curse, and it was almost as if she had died.

Thus, the Queen was happy as now the mirror would only say she was the most beautiful. When the dwarfs returned home. They saw that Snow White had passed out. They assumed she was dead and lay her in the forest over a bed of flowers grieving her death.

One day, a young prince was passing through the forest, when he laid eyes on Snow White, who was still unconscious. He had never seen a woman so beautiful. He was so enchanted by her beauty that he was sure he had fallen in love at first sight.

He gently lifted her hand and kissed it, and suddenly Snow White’s eyes shot open. The first gesture of true love had woken her from her deep slumber. The Queens’s evil spell had been lifted forever and nothing stood between Snow White and her prince.

Stars in the Sky is our next story.

Aladdin and the Magic Lamp